You probably read that title and thought, what? Is she crazy? Maybe a little bit. But this was not crazy at all. It was beautiful and sad and perfect all during my Thursday lunch break.

A couple of weeks back my boss gave me a gift card to go get my footsies done. I have been putting it off for days and finally decided I was going to shave my legs this morning and go get those puppies done. I do not like to go get my toes done very often and by that I mean once a year, maybe, mostly because I do not like people touching my feet and whenever they do I cringe and have so many insane emotions than run through my body as it is happening. So, if you ever watch me get a pedicure it is pretty entertaining, to say the least.

Today was no different than any other day and this pedicure trip was going to turn out just like the rest. Me sitting uncomfortably in a chair that is supposed to be super comfortable as it massages you, but the fact someone is touching your feet and doing crazy things to them takes away any enjoyment that the chair may bring you. But to my surprise when I got to the salon, my favorite one in town, by the way, I sat down to what looked like a ten-year-old boy who was going to do my toes.

I was already super concerned about how this was going to pan out, but now I have a ten-year-old doing my pedicure?! I seriously thought that I came at the wrong time of the year if they let their children give pedicures during the summer. This was promising to be everything I hoped for and then some. I begrudgingly got in the chair and allowed him to start my pedicure. I decided I was going to be nice whether I liked it or not because I only had an hour and I wanted this to be over as soon as possible.

In the first couple of minutes, I kept my nose in my phone so I didn’t have to watch the torture that was mine. But every time I looked down to see how it was going, he would smile back up at me with the sweetest grin and absolutely no idea that I hated pedicures or cared about how young he was. I kept that up for a while trying to ignore him and that he was touching my feet. But once he started getting to work on my callous I could not hold it in anymore and we both started laughing so hard. He looked at me like I was crazy, as did every other person in the salon as I tried to explain to them all how I hated my feet being touched and this part of the pedicure is always the worst for me. 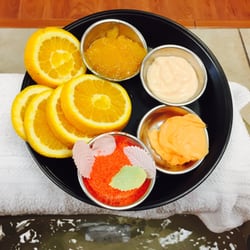 Now that the mood was lightened for everyone and I no longer had my nose in my phone. I was able to take in this person in front of me. A couple minutes before, the lady next to me was making conversation with her tech and mine and had asked their ages (they both looked incredibly young) as we found out her tech was twenty-four and mine was twenty! No way, not possible, you look like a ten-year-old. I’m sorry, but you do. As I started to study him I noticed that he did not look like a ten-year-old at all and instead looked like a young man and indeed could potentially be twenty years old (I still refuse to believe it).

My tune started to change as the pedicure went on. He was being “gentle” with me but not lacking in the services he was performing so I was distracted from the usual torture and as I took in all of who he was I started to notice some interesting things about him…

He had scars, so many scars on his legs and his wrists and his arms. Every time he looked up at me and gleamed the scars would disappear and then when he looked away and got back to massaging my feet, I noticed all of the pain he was wearing and my heart began to break. What in the world could be causing this beautiful soul so much pain to make him want to harm himself? What is going on in his life or that he has been through to cause him so much pain that the only way he could find an escape from it all was the release in putting a razor blade to his skin? 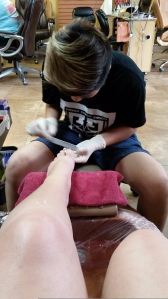 He noticed that I noticed them and hesitated for a moment and tried to hide them, but ever so swiftly to not put any pause in the work he was doing. I instantly stopped looking and started praying. God, take his pain away. Maybe his pain has been gone for a long time and he’s overcome whatever he’s been through, I pray that he has, but if he hasn’t, take this cup from him. Heal him, Lord, from the inside out in a way that only you can. Love him, God, so deeply that peace would overwhelm him and the darkness would flee from his life. Thank you, God, for bringing me here today, so that I could see him and fall in love with someone so special…I know this pedicure and this moment was set up by you and I am so thankful to be here today. Thank you for coming with me to get my pedicure. Thank you so much, Lord.

The rest of our time spent together was about the same. My phone died (in the yellow I might add). I think God wanted me to soak it all in and just enjoy this moment for what it was. I have never had a more perfect pedicure before in my entire life and as I sat there contemplating how much of a tip to give him I instantly thought, ten should be nice. Then I argued no, twenty, this was a free pedicure and I really want to bless him today and bring some light to his world. But then God said, no, match it. Match it? Yes, give him what you would have spent if you paid for it yourself. Okay God, if that is what you want me to do.

As the final minutes were coming to a close and he was getting to the painting of my toes, an older lady walked in, you could tell she was a regular.  She said she needed a pedicure and her nails done and that she wanted the sweet girl who did them for her last time to do them. She looked over at me and said, oh good she’s here! She thought my tech was a girl! He looked at me, obviously offended as any man would be and tried to ignore her and finish my toes. She then came and sat down in a chair one over from me and was talking to the lady starting her pedicure and asked if her daughter could please do her nails because she really enjoyed it so much last time (still talking about my tech) and his mom said yes and he noticeably got upset, but then shot her the sweetest grin when she looked his way. I felt so bad for him, and no one was going to tell her she was wrong. But this moment was just a glimpse of what his pain must be like, so heavy and so deep, but the second that someone looks his way he flashes the most beautiful grin their way.

Before I knew it he was finished and it was time to go, I honestly was not ready to at this point. I did not even care that it had taken thirty minutes longer than I had planned. He gently put my flip flops back on so as to not mess up my paint and then came to my side and helped me out of the chair as he asked me if I was happy and did he do a good job. I sheepishly said yes, and told him to have a wonderful day as I walked to the counter to pay. 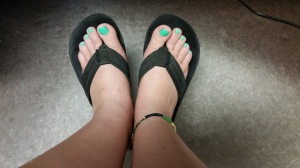 28 thoughts on “My pedicure with Jesus”

Texas born and raised, 29 year old mother with two little boys, who is happily married and is a grateful believer in Jesus Christ.