I have had the opportunity to really look at my kids quite a few times in the last week or so, the first being when my oldest and I went out to eat after his baseball practice last Thursday, just him and me. He sat across the table from me, so little yet so much older than I remember him being, beautiful in every way, talking to me like a normal adult sitting across from me on a dinner date, except instead of an adult it was my five-year-old son.  I honestly do not remember anything that he said to me during that dinner as horrible as that may sound, except for random chatter about how much he was starving as he shoved another chip into his mouth and how cold he was (because he left his jacket in the car even though I told him to bring it inside), all I could do was stare at him and admire him and think about how much I love him, so much.

He sat across the table from me, so little yet so much older than I remember him being, beautiful in every way, talking to me like a normal adult sitting across from me on a dinner date, except instead of an adult it was my five-year-old son.

The second opportunity was yesterday, I had to take my car to the shop to get new tires put on it because we were lucky enough to get a flat after driving through construction work on the railroad near our house. As sucky as that may have been, I was blessed with the opportunity to spend some more one on one time with my oldest in the waiting room as we waited for the car to be fixed. There was a pile of toys and books in the corner, and he chose to play with the toys first of course, so incredibly happy that he found the coolest toys ever (which I am sure were from McDonald’s) that were so entertaining to him because it was something he had never played with before and he was not having to share it with anyone else, especially his little brother.

I love watching his imagination, the silly things he comes up with as he plays, but mostly how his eyes sparkle while he does it and then how he looks at me to find enjoyment on my face from all the fun that he is having. After a couple of minutes, he picked up a book and decided he wanted to read to me. Side note; he just learned how to read this year and somewhere in the last month he went from struggling with sight words to reading 60 page Dr. Seuss books without a skip in his step. I enjoy listening to him read. But again, more than the words that he was reading to me, I noticed how magnificently beautiful he is, how long his eyelashes are, how he has little freckles all over his cheeks, his big beautiful blue eyes and how he has the cutest little smile that he will flash at me when I least expect it. This time I decided I had to take a picture and savor him, in that moment, forever.

The most recent opportunity that I was so incredibly blessed to have although I fought not to, was with my youngest son, last night as he lay in bed next to me as I was struggling to get him to go to bed. He was not supposed to be in bed with me, I originally put him to bed in his own room but fifteen minutes later it was extremely quiet in the house and I knew that he had not fallen asleep that fast so, I sent my husband to check on him and low and behold he had my brand new stick of deodorant in his bed and had smeared it all over himself, thus destroying the entire stick and making a terrible mess in his bed that he now could not sleep in. Perfect.

He smelt lovely, but I was less than thrilled. However, he won the battle and was now lying next to me smelling fresher than ever and so incredibly happy to be next to his momma in her bed where he wanted to be in the first place. I turned to look at him as I told him what a huge turd he was for doing that, and he proceeded to stroke my face and tell me how much he loved me. My heart melted right there. He pulls that card often, doing something that will get him in trouble, usually when he knows better not to and then pouring his love on me just when I am most upset with him. I would like to say that I am strong enough to resist him and continue to be mad at him in those moments. But I am not, and I do not stay that way. Instead, I just lay there while he strokes my face and gazes at me with so much love and admiration, just loving on me his favorite person in the world. 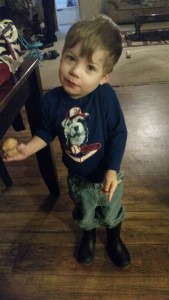 As I drove to work this morning, I was ruminating on these moments. Thanking God for blessing me and choosing me to be these two amazing little boys mama.  Wondering how I got so lucky and then realizing God feels the same way about me, the exact same way, if not so much more than that. He is constantly in admiration for me and just looking down on me smiling no matter what it is I am doing, and in those moments where I mess up, which is often, he allows me to come to Him and say I am sorry and love on Him and He just soaks it up and loves me back with a love greater than anything I will ever know. He uses my boys more than anything to show me that, He is my daddy and I am His daughter and there is nothing I can ever do to change that.

This song says it all.

14 thoughts on “Through Their Eyes”

Texas born and raised, 29 year old mother with two little boys, who is happily married and is a grateful believer in Jesus Christ.